25 Lady Adventurers spent a fantastic winter weekend at West Branch Pond Camps from March 2 through 4. We began by driving 3.5 hours north. I was lucky to ride with Juliet Browne who drove Liz Freeman and me all the way there without complaint. (When I drive I complain a lot so that is why I noticed Juliet’s serenity.) There was absolutely no snow on the ground when we left Portland, although the guy at Gorham Bike and Ski where I rented snow shoes that morning before we left assured me the snow would be excellent 3.5 hours north. I will admit I was skeptical. But then it was so very sweet when he charged me only the $15 daily rental for Saturday and Sunday, and did not charge me for Friday when I picked them up or Monday when I would return them. I was amazed at his generosity, having moved recently from Massachusetts where I would have been charged by the minute.

When we arrived there was an absolute abundance of snow so we piled our skis and bags onto little sleds that we pulled to our assigned charming, uninsulated, drafty log cabins that were both cozy and spacious at the same time. The cabins were lined up along a frozen snow covered pond and surrounded by woods. The cabin I shared with Ann Murray and Kate Murray had a little sitting area and 3 very comfy beds. We threw our stuff down, pulled back on boots, hats, and mittens and trooped over to the unheated but most elegant outhouse I had ever had the pleasure of using. It was outfitted with a flush toilet with a real toilet seat, an honest-to-goodness pedestal sink with hot water, a shower I couldn’t imagine using with all that cold air swirling around, and an electric light that blinked on as soon as I opened the door. We then wound our way along the wide trail until we discovered the cottage with the bottles of wine chilling in the snow along the path to the front door where Gillian was hosting happy hour. We entered the bright warmth and it was then that I congratulated myself for my stunning wisdom in signing up for this trip to the frozen, but ever so cozy and welcoming north.

Things I admired: fat down feather slippers worn by Alysia Melnick; Kate Murray’s long thick sweater that served as both a bathrobe and a warm layer; the Ladies Adventure Club patch that Alicia Heyburn took the time to sew on the shoulder of her jacket; Ann Murray’s snowboarding pants that slide easily over thick layers and keep out wind, making bathroom expeditions easily accomplished. Those pants have cleverly insulated knees which facilitate kneeling to rekindle the wood stove fire. I was impressed when Blanche Belliveau and Patty Butler took the time to stand enthusiastically in the biting cold wind by the pond to take photos of the beautiful views. Then there was the amazing breathable face mask that stylish Maria Canning wore as she skied across the pond. What I most admired was the Lady Adventurers who were not afraid to go really fast down long downhills. I was like that once, but this trip I realized I had become a lot more cautious and wanted to take the hills by snow plowing really, really slowly. Sigh.

Liz thought to bring actual ice cubes in a big thermos, a bottle of tequila and lots of lemons. I had some of her amazing medicinal drink on Saturday and was impressed with her planning skills and bartending ability.

I was also very impressed with the thin cotton short-sleeved v-neck tee shirt Patty Howells had on during our first Happy Hour; and the SLEEVELESS tee Gillian wore to supper that first night. I was completely baffled as to how these smart women knew summer items would be wise wardrobe choices in the frigid North. But you know, they were. It is HOT AS THE BLAZES when wood stoves get cranking. It was in the wee hours the next morning that I remembered wood stoves could be brutally uncaring when they are not cranking, but we’ll get to that.

The meals we had were served family style. The food was both amazingly delicious and plentiful: turkey dinner on Friday night; lasagna and the best antipasto I have ever had on Saturday night. There was oatmeal and pancakes and eggs and bacon or sausage in the morning. We packed lunches to take on the trail.

As I got into my very warm sleeping bag bed that first night, the thought crossed my mind that the two heavy wool blankets on my bed were superfluous. So I slept on top of them because I was deliciously warm as I drifted off to sleep thanks to Ann who knelt down with her snowboarding pants and quietly loaded up the wood stove so comforting orange flames flickered behind the glass.

It was later that I woke feeling absolutely frigid. And as I studied that useless stove sitting there like a cold lump I wondered why I had not covered my sleeping bag with even just one of those blankets as insurance. The time was 3 AM, and I lay there shivering for a while, trying to convince myself I should leave my bed and put another log on the fire that I hoped would ignite by itself so I wouldn’t have to spend much time blowing on embers and adding kindling. It was just too cold for fire starting, and I didn’t own pants with insulated knees. I finally located my headlamp, threw a log in the fire box, left the little wood stove door open a bit to add air, struggled into boots, snow pants and jacket, and went on an expedition to the outhouse. And I found I didn’t need my flashlight because bright moonlight illuminated the quiet little cabins, the beautiful forest all around, the ice fishing tip ups on the pond, and I discovered I was not at all cold as the moon lighted my way to the outhouse with the amazing flush toilet. What luxury.

The next day some of us snowshoed and some of us skied and we spent the day out of the wind on the wooded groomed trails admiring the scenery.

It was all wonderful and really, really fun. 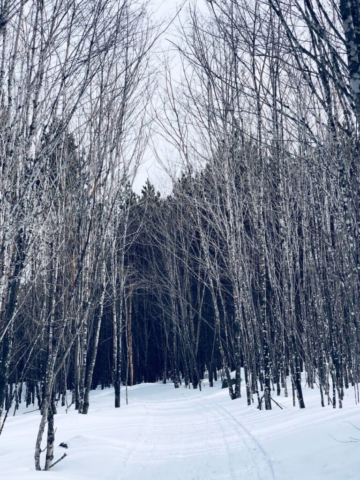 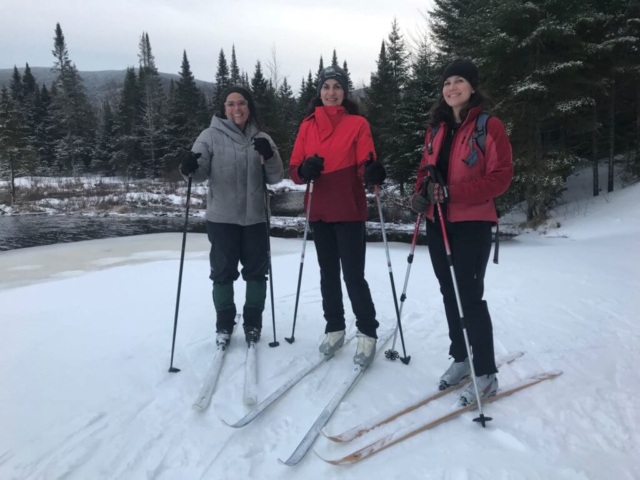 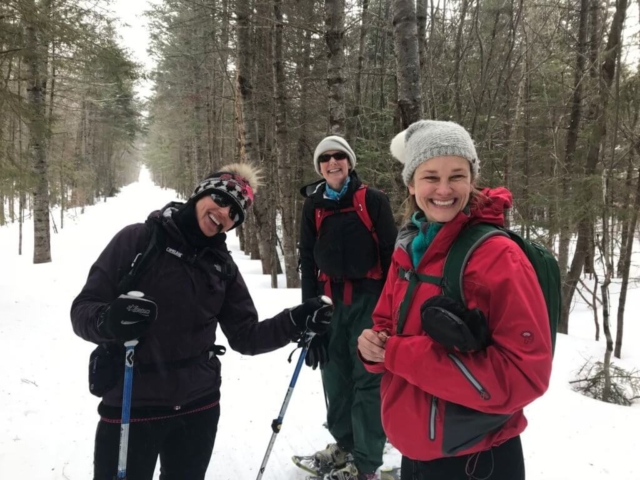 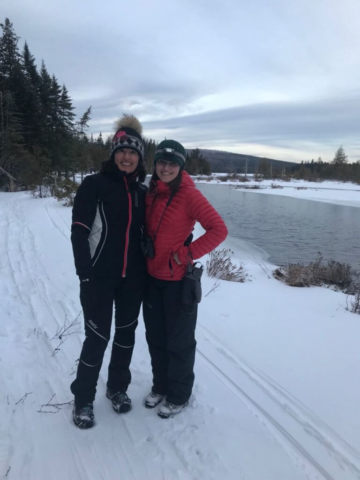 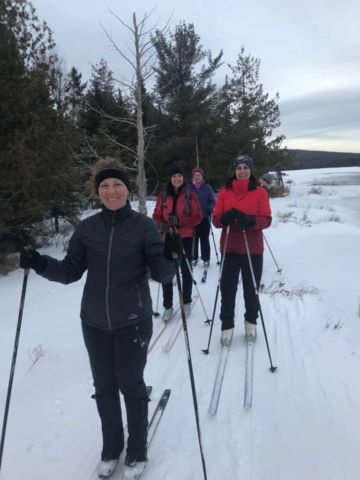 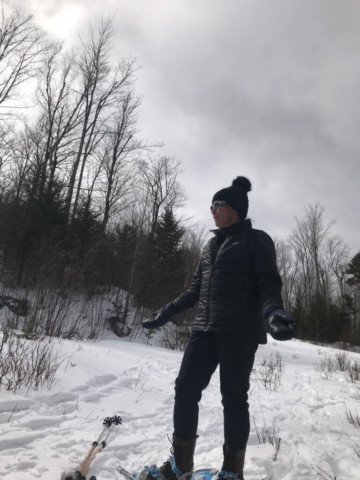 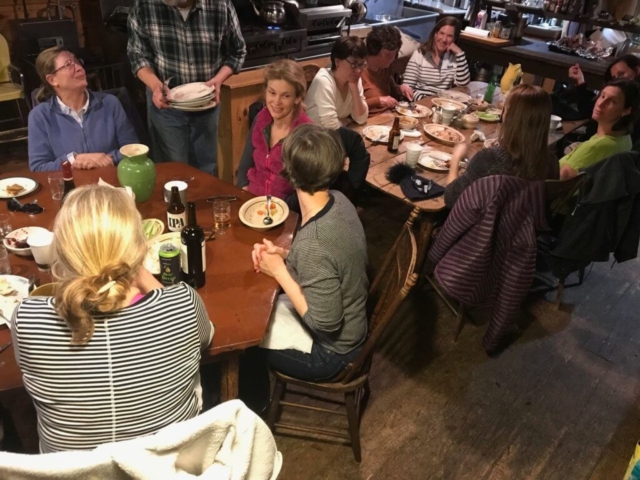 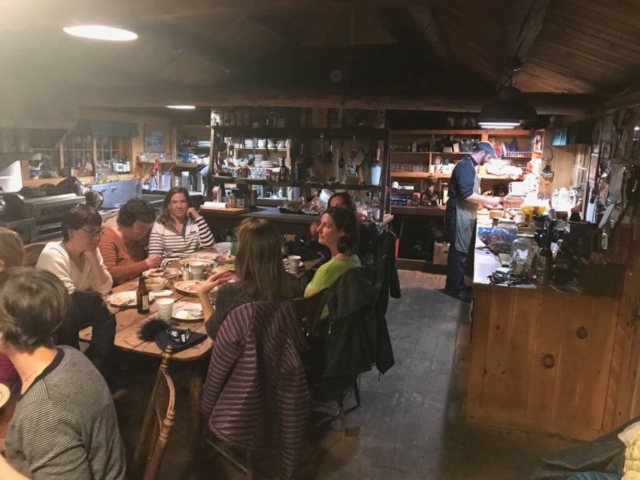 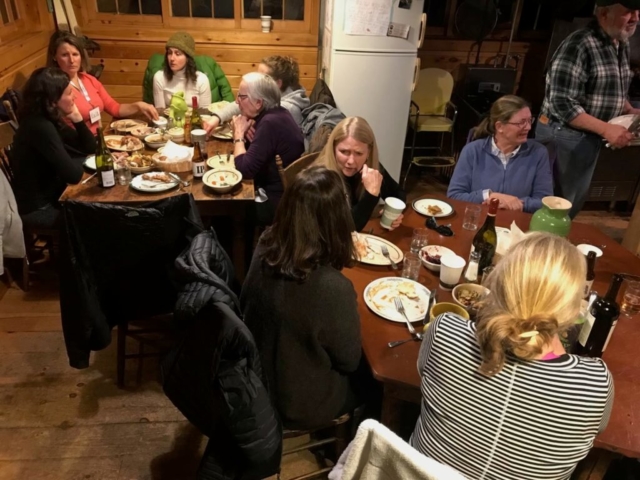 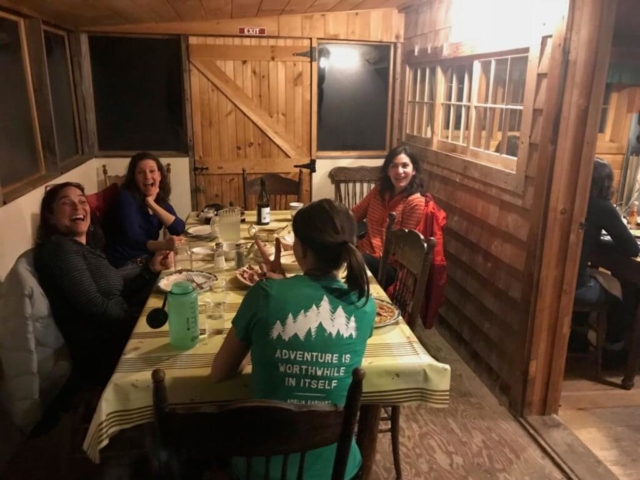 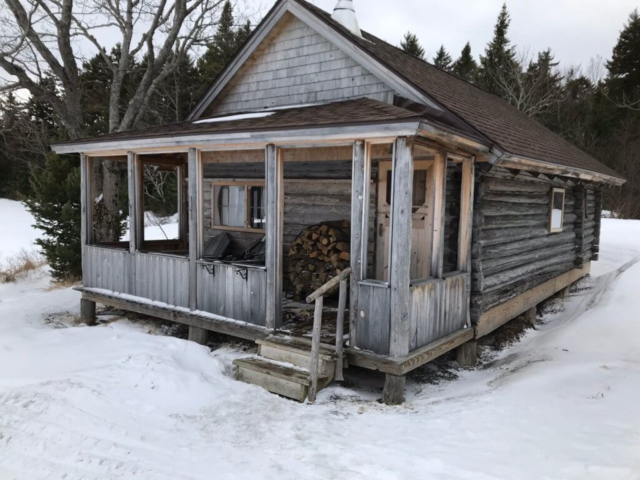 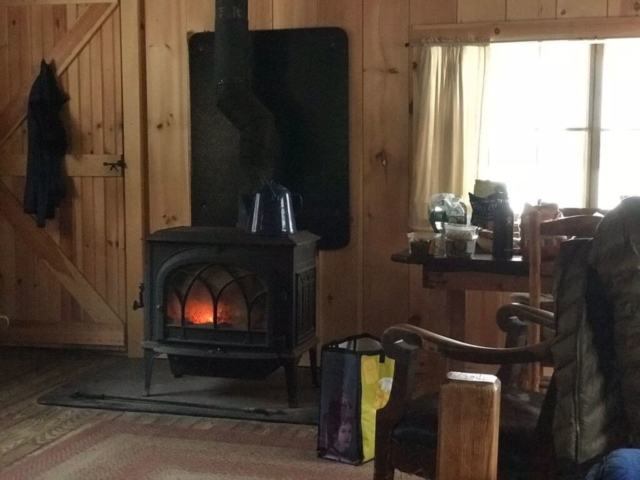 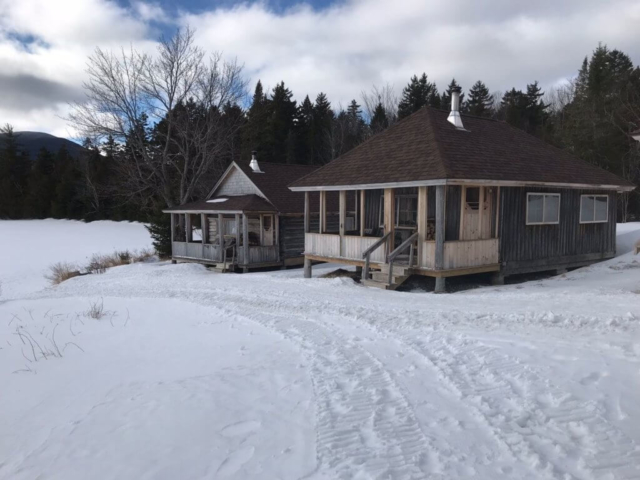 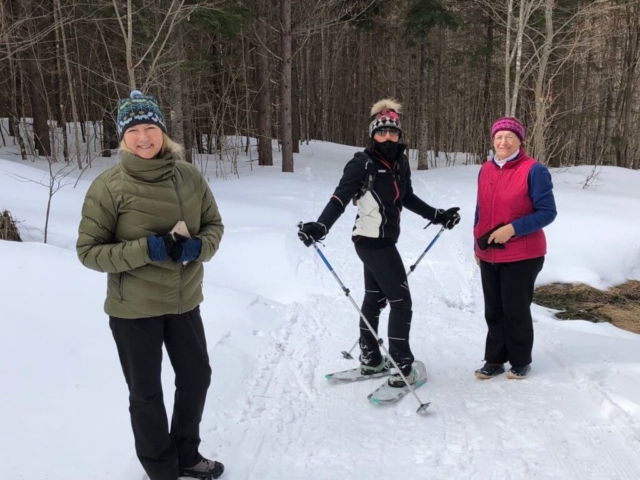 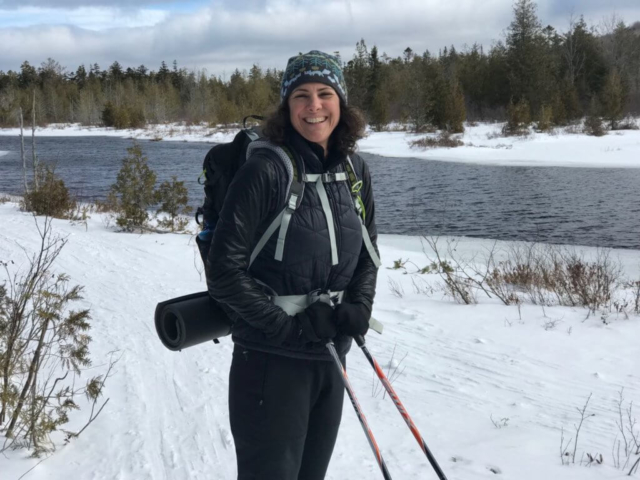 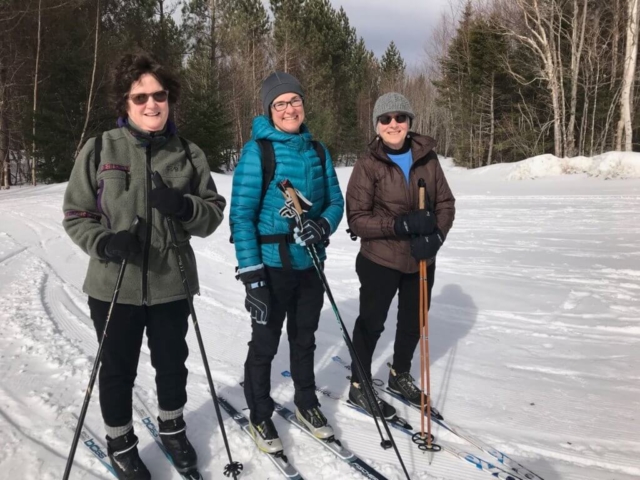 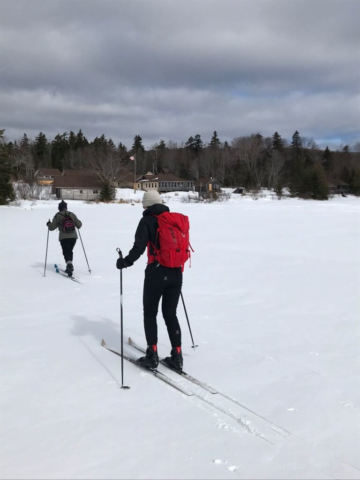 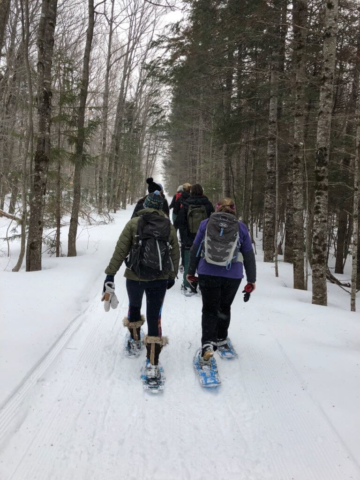 Hike to the alewives All Trip Reports Happy New Year

It’s been a fabulous six years of adventuring and in December, our adventuring calendar and operations of the Ladies Adventure Club will wind down. If you are not part of our community and are looking for a hiking group, check out AMC (Appalachian Mountain Club) or MOAC (Maine Outdoor Adventure Club). There are also smaller groups that you could suss out on Facebook or Instagram. The private LAC Facebook page will remain active past December so for current members, you can continue to connect there.