Yesterday six of us arrived at the Spurwink Rod & Gun Club for an introduction and lesson on handling handguns. Our instructor Scott Merrill was a tall guy in his 50s who turned out to be a fabulous teacher to us neophytes. He continually stressed the importance of safety and throughout the class underscored that through his words and actions. We started with learning the parts of a handgun (Action, Handle/Stock, and Barrel), moved on to loading cartridges into a few different size guns (revolvers and semi-automatics) and then practiced our stance and grip. We learned that even blanks can be dangerous and that’s why he uses dummy ammunition for training (there’s no gun powder in the cartridge). 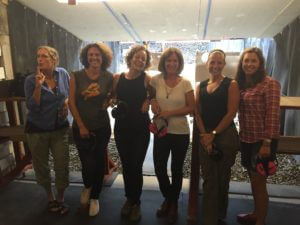 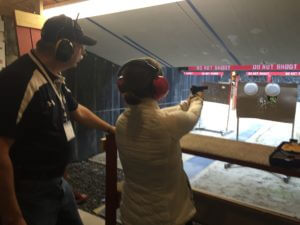 And then we were ready to head to the range. The Spurwink Rod & Gun Club has recently enclosed their entire shooting area (sides and back) so even though it is outside it almost feels like you’re in an inside shooting range. Scott, who is an NRA certified instructor, has obviously taught this intro many times. For our first shot, he had us load only one cartridge (a bullet is just the projectile tip of the cartridge) in case we freaked out after firing and then wouldn’t be left with a magazine full of live ammunition in the gun we were holding. None of us freaked out. So for the next go-round, we loaded five cartridges into the .22 semi-automatic pistol. We were shooting at paper plates about 10 feet in front of us. Scott said they never use human silhouette targets at the club, which I think we all silently applauded.

After each of us shot the five rounds, we moved to a .38 revolver, which was much heavier and used a much larger cartridge. It also had more of a kick. I liked that piece better – it felt more substantial in my hands and it was very satisfying to see the bullet holes in the paper plates after shooting my rounds.

We had to wrap up at 6:00 so didn’t have the chance to move onto the .45 caliber handgun (I think that was the last one we were going to try). 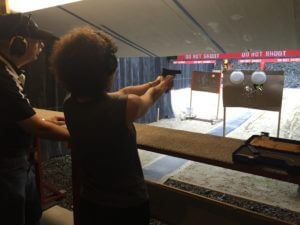 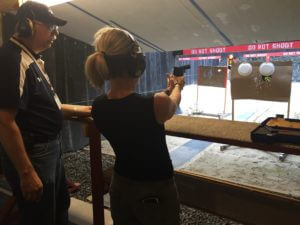 When you think about handguns, you most likely have an immediate reaction. It’s hard not to. I know that some of the LAC members are very much anti-gun and part of me is too. But going through this short course on learning about guns and using guns, took away a little of the mystery and also made me wonder why safety courses are not mandatory for every gun owner.

One of the things that impressed me about Scott was that he never brought up politics or gun owners’ rights. I didn’t feel awkward walking in to that classroom as a liberal who is voting for Hilary Clinton. And even though I kept forgetting which end of the cartridge was supposed to be loaded into the correct side of the magazine, he never expressed frustration or judgment. He celebrated when we made good shots and told us how to fix our aim when we did not.

If you’re intrigued, I do have up to four spots available for the class on Saturday, 10/15. If shooting a gun is something that grabs you, but you’ve been nervous to try it, this is a great place to give it a shot (pun intended).

And thanks to Ainsley, Gretchen, Sarah, Kate and Ann for making this adventure such an awesome one. 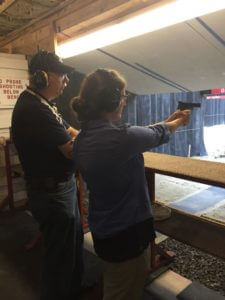 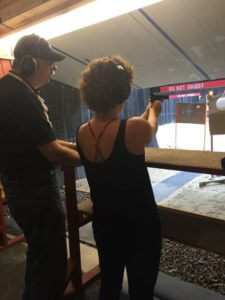 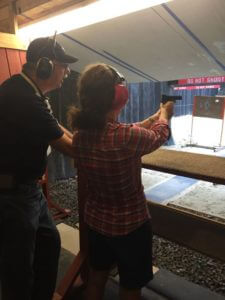